If you are a Star Trek fam, you will undoubtedly know the Next Generation episode called “Relics”. It is the one where Scotty the Engineer of the Original Series Enterprise ends up on the NG ship.

I won’t go into lots of details as the fan-favorite episode is fairly simple. Scotty arrives on the new Enterprise some 75 years after he put himself in stasis. He bumbles around at first not fully grasping that the ship and in fact, the Universe has progressed. He finally feels very out of place in a world that has now passed him by.

He enters the holodeck which has created a replica of his Enterprise bridge. He finally realizes that he is a relic.

So in a way, I too am a relic. My last job was quite fulfilling and I lasted there for 17 years. I managed hundreds of computers in a computer room the size of a foot ball field. I had read the manuals and code that created the software operating system and also delved into the manuals and code for many subsystems. Just like Scotty, I felt I could ‘feel’ the status of the systems and I knew workarounds that others had no clue to. At one time, I had a way to bypass the secure logons to take over the system and I know that no pone else did, or the problem would have been fixed. I never saw nor heard of someone using this hack. I never did reveal it because once I did there would be the possibility others could pass it along. I also did not want any customes to know it. I did, in a round about way, have the problem addressed but never let on why.

Even before my 17years as a computer engineer, I had decades of access to the earlier models, dating back to dial up access. Unless you are a computer nerd (or System Manager in my case) you probably don’t understand the effect computers can have on you. Just out of college I began playing with them and got a thrill when my programs controlled a machine. Today it might be the same as the feeling if you were to read some books and created a robot that works right off! I taught myself to program and learned a number of languages. I never did well with human languages because there were too many exceptions. Computer languages made more sense to me.

People learning programming will be taught to flowchart the program. This is a diagram which shows how all the modules fit together. There might be a box that shows accepting data from the user, then one which shows error checking that information to put it in a specific format for the computer to use. There will be main routines and so on. I never learned nor flowcharted a single program that I can remember. The flow of the program just seemed logical to me and I could visualize it. Now these programs were not extremely complicated, but still, I could visualize the flow and would often just start entering the code into the computer. Many of the routines, such as error checking, are common in many languages you just have to change the code, but the steps are the same. This included in chwecking length and filling or stripping items, checking if the user entered just numberic data or alphanumeric data. I once had to write an inventory system which would have data entry made by people who had only typerwriter knowledge. I knew that some typewrites used things like a lower case “L” for a one. I had to account for that. One time the person entering data joked and entered the year in Roman Numberals. My software issued a kind warning “Sorry, I think that you typed other than numbers for this entry”. I have seen other programs choke if the data was not correct.

For a Public TV Station event, I wrote a complete inventory system. You could enter items which were donated then track them through the sale and pickup information. I created reports to show hourly, daily and cumulative totals and averages. I also calculated average selling price in categories as a percentage of retail. We ran that software for the 10 day event every year for almost a decade. I made very few changes during that time.

So like Scotty, I too felt sad when I was retired from the computer company. I *could* have purchased a small mainframe (now in the hundreds to thousands of dollars) but here in Hawaii it didn’t make sense.

Then… I fould a free simulation which runs under Windows and I actually loaded it on a Windows 7 system. I can open it up and with a few exceptions of things that have not been added, it is a window in time for me. I can use the Database system to hold and query data, I can program in Basic, Fortran, Cobal and other languages and can even poke around in the operating system code. It really is like a holodeck.

What used to cost hundreds of thousands of dollars, be only accessable in hardware and needed a computer room with power and air conditioning is now running on demand on my Windows 7 box.

So like watching an old movie or opening an old scrapbook, this simulation takes me back to things that I used for over 2 decades. 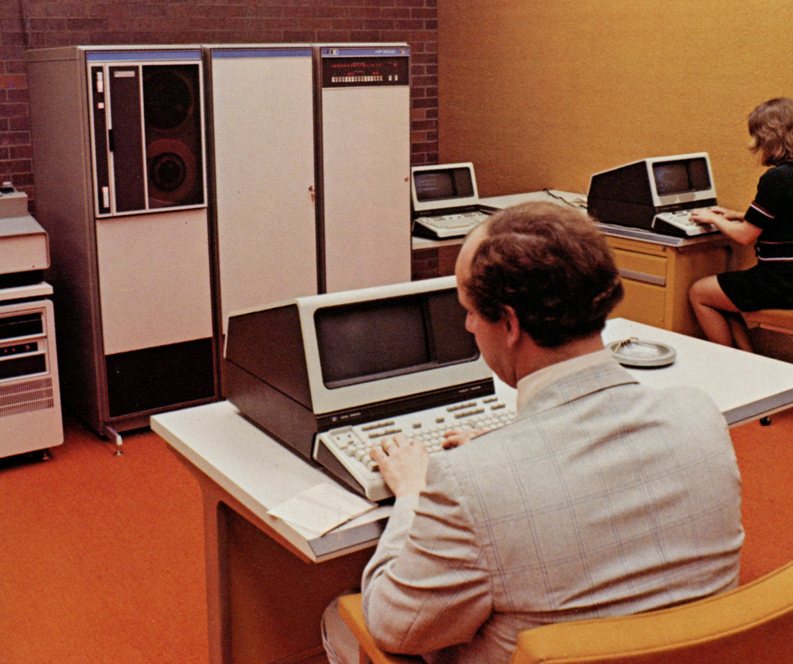