↓ Skip to Main Content
Home › blog/">blog › What Once Was Lost, Now Is Found

What Once Was Lost, Now Is Found

In our lifetime we tend to lose many things which gave us happiness. These include childhood toys, friends, lovers and memories. To other people these are unimportant yet to us they represent a part of what made us unique.

I have certain memories which are impossible to determine why they are important. One memory came up this week because my Cousin Charlie passed away suddenly. Charlie lived across the street from my Grandmother and all the times I went ‘down the shore’ I would see him and his family. At the time, members of the community had gathered and bought one of the beaches there, turning it into a private beach. Their membership dues paid for a lifeguard and beach cleanup. Other beaches along the shoreline had many visitors each year and could be overrun at times where this beach was quieter.

Charlie was a lifeguard at this beach and I felt quite safe as I was never felt much at home in the surf there.

The one snippet of memory I have about this beach is on some particular day I was lying on the beach in a specific place. Nothing happened or I would have remembered, but I do remember that particular spot of sand. Maybe I got sunburned, but who knows.

Other memories include items where there was much more to remember like flipping my truck and a time I was in a 9 or 10 car accident my first day of retirement.

I remember being infatuated with a cute girl during my sophomore year of high school I got up the courage to call her at home and her response was less than welcoming. Another sad memory was when I proposed marriage in college and it was accepted, only to have us split a few days later because of extenuating circumstances.

On the other hand this week I had a happy reunion of sorts.

When attending community college I was introduced to computer, access two remote mainframes at the University of Virginia at Charlottesville. Even after all these decades I remember they were in Thornton and Gilmer Halls. I used an old ASR-33 teletype and stored my programs on punch tape. I cut my teeth on HP’s Timeshared BASIC software.

Many decades later I worked for a neighbor who had an HP3000 mainframe in his basement, using it for a secret project. My ability to program and manage the computer along with my Ham Radio background were essential in getting the job. There was even a time where my skills and questions saved the day. The boss was running his software and the system would fail randomly. We submitted multiple memory dumps and the engineers had not found the cause as there was random data and no indication where it came from. I thought there might be common cause and found a list of the times and dates of all the failures. It turned out to happen Saturday or Sunday afternoons not long after lunch. Armed with that data the boss narrowed the problem down. He would answer a console request to start storing data to tape then went to lunch. The system failed not long thereafter. It turns out that the text he entered in response to that console request was overwriting memory which was access later. The programming manual said that responses *should* not be longer than xx characters. He assumed that anything longer would be ignored. It was not, it overwrote part of a device table and when the system went to access that location it was garbage and the system failed. The simple fix was for HP to add a line of code ignoring any thing longer that the expected length.

So not long after that time I was offered a job working for Hewlett Packard. With the encouragement on my boss, I accepted the job with the understanding that I could still help the old boss if needed, as they were not in competition with HP’s business. My new boss at HP was one of the people responsible for this guy in the basement actually buying a HP computer in the first place and he and my old boss were good friends.

So I worked for HP for 17 years leaving during the great purge as HP was purchasing Compaq. Leaving was a happy/sad time for me. I loved my job but I had been making many trips to Hawaii and intended to make it my home. I was able to go back to HP for a short time as a contractor before I finally left the mainframes behind.

After 17 years, while not considering myself an ‘expert’ was pretty familiar with the operating system called MPE. I knew much of its operation and makeup having read all of the source code and studied the internal tables.

Since that time I have really missed the system. I especially missed both BASIC and the database and report system IMAGE/QUERY.  I once had duplicated overnight a report for a Savings and Loan which their programmer took many days to do on an IBM computer. I could make changes then in minutes that he took days again to change. I also had created a complete inventory system using this database and BASIC.

Over the ensuing years I have often come up with data that I wished I could load into an Image database. Instead I had to resort to Excel spreadsheets. Also I could not find a good version of BASIC for the PC which had the builtin libraries I was used to. Yes I guess I could resort to C or Pascal or some other language, but in many cases BASIC was quicker to design and implement for me. A great example was back at HP when I got a call from the accounting department. They had an accounting close and the numbers were to be reported to Wall Street in a day or so. They found that they had too many database entries clumped together and needed to separate them. Their programmers said it would take 3 days to code in COBOL and verify their program. I said I thought that I could do the same task in perhaps 6 hours. I copied their database and started coding. Rather than write the hack from nothing I knew that the database program itself could do the job as it already had that ability to move data. My idea was to create an input file as though someone was typing the commands, just faster. Thus I said “Find Item=9000 and Rename to 9997”. After 3 hours I went back to the manager and said that I was afraid that my estimate was way off. He was sure that I just proved that the programmers had been more accurate until I told him that I think I am done already. He checked my copy of the database and it was exactly what he needed. BASIC to the rescue.

I had tried to get hold of a commercial porting of the MPE operating system to no avail and had even considered with buying a refurbished small computer for $1500 or so except shipping was a big deal. So I have had withdrawal pains for almost 2 decades, that is until this week!

There is a public domain versions, albeit an old pre-2K version available witch runs on a PC. In fact I have it running on my Win 7 box and is still pretty fast. It includes BASIC, IMAGE and QUERY, FORTRAN And COBOL along with other software. While it is not perfect and a slightly different version that I last used, it is certainly usable and most welcome. I have not found all of the input and output accesses but I am happy enough.

So finding this software for me is like some of you going to a car show and finding your first car all cleaned up and looking just like you remember it. It is also like going back to childhood home and taking a nostalgic trip as you look in all the rooms and remember things you have long forgotten.

It is like taking a long drive, stopping at a restaurant and finding you first love working behind the counter… no wait, it is NOTHING like that one!

To you the image below will be pretty plain and if you saw it out of context might think “What is the big idea, that looks pretty simple”, but for me, it is like finding your long lost friend. 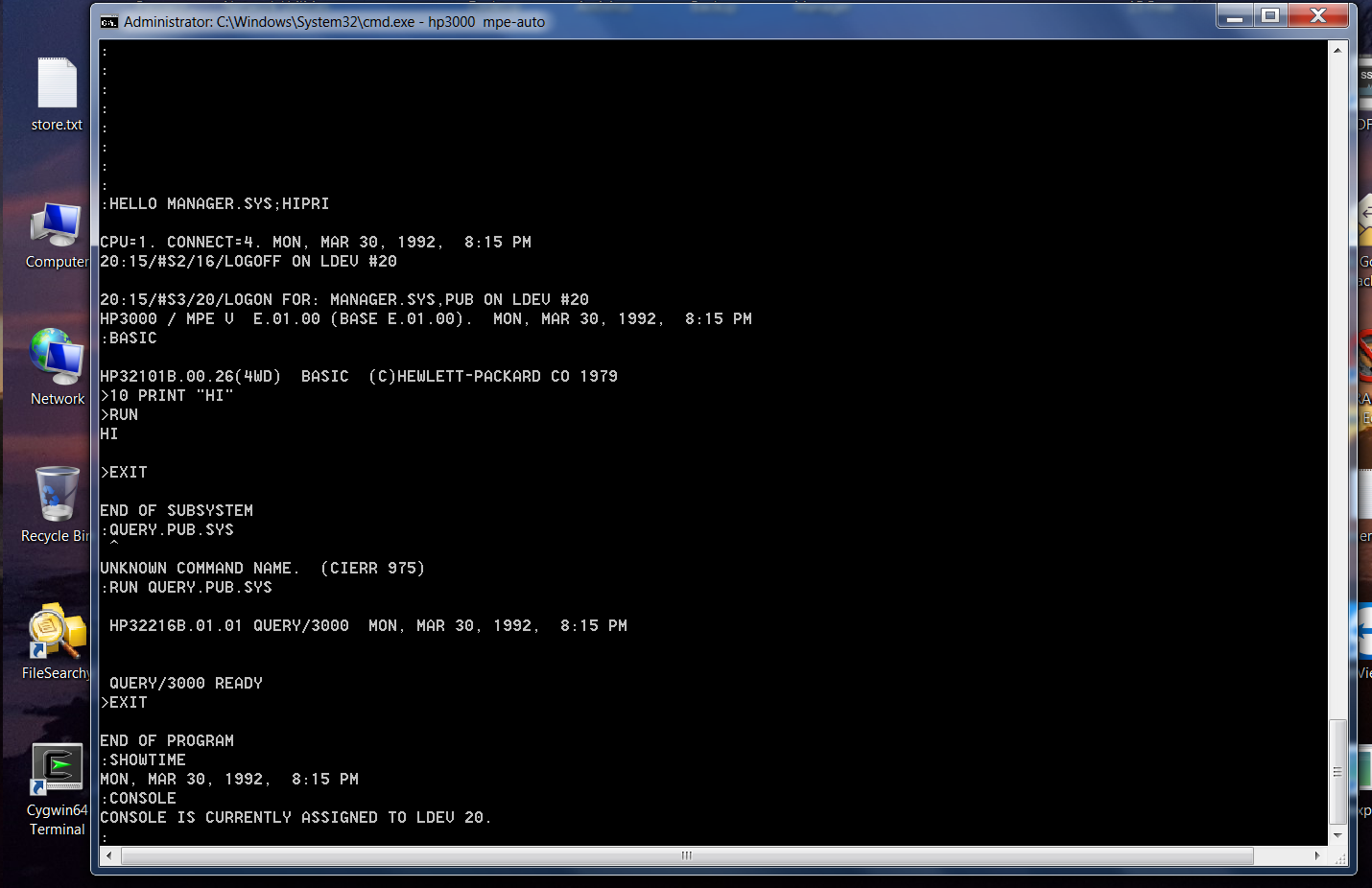